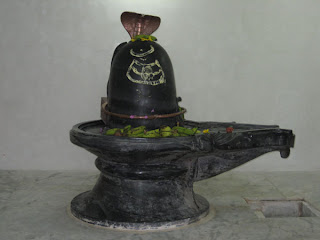 Posted by SAMBHU at Sunday, November 29, 2009 No comments: Links to this post 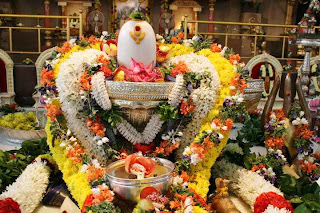 Parad is regarded as the sperm (seed) of Lord Shiva and in Ayurveda it as a flowing metalloid (fluid metal).It is said in Brahma Purana that he who worships Parad Shivling devotedly, whether one is male or female, Brahmin, Kshatriya, Vaishya or Shudra gets full wordly pleasures, and at last attains supreme destination (salvation). During life-span they get glory, honour, high office, name and fame, sons, grandsons and learning. Parad Shivlinga is a very rare Tantrik article.
It is belived that even by touching the energised Parad Shivling, one's sins are removed. It is recommended by our saga's to adore and worship parad Shivling,. this lead them to be infused with extra ordinary ,velour invincibility, adding to their fame and popularity far and wide, causing and spreading almost whole over the world.
It is best recommended for Peace, prosperity and happiness. It is not only matchless but also unparallel in whole world. Mercury has property of liquidity which in itself involves difficult process of solidification. But by the grace and compassion of Lord Shiva parad shivling is made for the benefit of people of the world for peace and prosperity.

o Prosperity to the house or office
o No shortage of food, money or clothes.
o Brings peace to the premises.
o If kept in the bedroom, it brings harmony among the couple.
o If kept during a religious gathering, it brings knowledge by evoking Goddess Saraswati.
o Enlightens the students with knowledge and sharpens their memory.
o Fill it with Ganges water and sprinkle it on a person or in a premises. Malefic planetery effects and black magic evils disappear.
o Removes ill-effects of Brahmhatya, Gau-hatya and Bal-hatya (Dosha due to killing of a priest, cow or a child in the previous births.
Posted by SAMBHU at Sunday, November 29, 2009 1 comment: Links to this post

SHIV THE POWER & HIS SYMBOLISM

Shiva (Sanskrit: Auspicious One) is one of the main deities of Hinduism that is worshipped as the paramount lord by the Shaivaite sects of India. In Hinduism, Lord Shiva is regarded as the representation of the Supreme Being. He is known as the third element in the Hindu Trinity (Trimurti), the other two members being Lord Brahma - the creator and Lord Vishnu - the protector. Shiva is the destructive form of the Almighty. As the cycle of destruction and recreation is always in a circle, Shiva’s primary responsibility is maintaining the life cycle. Scholars say, as the Mahakaal, Shiva destroys and dissolves everything into nothingness but as Shankara, he also reproduces that which has been destroyed and dissolved. His symbol of Lingam or the phallus represents this reproductive power.

Lord Shiva is also considered to be the most unique of all Hindu gods and also the God of all. A great ascetic, Shiva is the only godhead who is forever in deep meditation, totally absorbed in contemplation in His abode, Kailaasa Mountain in the great Himalaya. Lord Shiva is also said to be inseparable from Shakti - Parvati the daughter of Himavaan - Haimavati. There is no Shiva without Shakti and no Shakti without Shiva, the two are one - or the absolute state of being. Shiva is often shown with many faces, as creator, destroyer and preserver in total command of the cosmos. He contains both good and evil. He is moody, free of inhibitions, easy to please, protector of the down trodden, and has the power to alter the laws of destiny. Thus, it is Lord Shiva is known as the God of mercy and kindness. He protects his devotees from all evil that are always around us. He blesses his followers with grace, knowledge and peace.

Shiva as Ardhanareeswara Lord Shiva is said to be half man and half woman. In the full figure of Siva the male and female principles are united. Shiva Linga - the symbol of Lord Shiva which consists of both Lingam (phallus) and yoni (the female organ) represent the totality of his nature and the totality of all created existence.

God Nataraj where his dance is to the beat and rhythm of creation. He is also shown in sculptures with many hands. One pair of hands, for example, represents the balance between life and death. Shiva is 'tri netra' or three eyed, and is 'neela kantha' - blue-necked (having consumed poison to save the world from destruction). Besides, there are a lot many attributes associated with Lord Shiva. Here is a brief description of some of the important symbols that depict Lord Shiva. Each of his depiction signifies a different aspect of his Supreme Being.

Unclad body covered with ashes: This form of Lord Shiva depicts that Lord Shiva’s presence is much higher than this physical phenomenon. According to some scholars, Shiva’s body smeared with cemetery ash points to the philosophy of the life and death and the fact that death is the ultimate reality of the life.


Jata (Matted Hair): The flow of his matted hair represents Shiva as the Lord of Wind or Vayu, who is the subtle form of breath present in all living beings. Thus it is Shiva which is the lifeline for all living being. He is Pashupatinath.

Sacred Ganga: The holiest of the holy rivers, Ganga flows from the matted hair of Shiva. According to a legend, Shiva allowed an outlet to the great river to traverse the earth and bring purifying water to human being. Ganga also denotes fertility - one of the creative aspects of the Rudra.

The Third Eye: Lord Shiva is known as the three eyed Lord or Tryambaka Deva. The sun is his right eye, the moon left while the third eye of Shiva on his forehead is the eye of wisdom. It is the eye that looks beyond the obvious. The third eye can search evil from anywhere and destroys it completely.

Half-Open Eyes: The half-open eyes show that the universes cycle in process. When the eyes are completely closed it signifies the dissolvent of the universe and when it is completely open a new cycle of creation begins.

Crescent: Shiva bears on his head the crescent of the panchami (fifth day) moon. This is placed near the fiery third eye and this shows the power of Soma, the sacrificial offering, which is the representative of moon. It means that Shiva possesses the power of procreation along with the power of destruction. The moon is also a measure of time, thus Crescent also represent his control over time.

The Cobra Necklace: This suggests that Shiva is beyond the powers of death and is often the sole support in case of distress. He swallowed the poison kalketu for the wellbeing of the Universe. The deadly cobra represents that “death” aspect that Shiva has thoroughly conquered. The cobras around his neck also represent the dormant energy, called Kundalini, the serpent power. The snake curled three times around the neck of Lord Shiva depicts the past, present and future time. The snake looking in the right direction of Lord Shiva signifies that the Lord's perpetual laws of reason and justice preserve natural order in the universe.

The Vibhuti: Vibhuti is a three line of ashes drawn on the forehead that signifies the Immortality of the soul and manifested glory of the Lord.

Tiger Skin: Lord Shiva is shown sitting on or wearing a tiger skin. The tiger is the vehicle of Shakti, the Goddess of power and force. Shiva is beyond and above any kind of force. He is the master of Shakti. The tiger skin that he wears symbolizes victory over every force. Tiger also represent lust. Thus sitting on Tiger skin, Shiva indicates that he has conquered lust.

Rudraksha Necklace: ‘Rudra’ is the other name of Shiva. It also means strict or uncompromising and ‘aksha’ means eye. Rudraksha, the necklace worn by Lord Shiva shows that he is firm about his cosmic laws and to maintain law and order in the universe. The necklace has 108 beads, which symbolize the elements used in the creation of the world.

Damaru (Drum): A small drum with two sides alienated from each other by a thin neck-like structure represents the two utterly different states of existence, unclear and clear. When a damaru is shaken, the sound formed denotes Nada, the cosmic sound of AUM, which can be heard during deep meditation.


Trishul (Trident): A three-branched trident shown adjoining to Lord Shiva symbolizes His three fundamental powers will, action and knowledge. As a weapon the trident represents the instrument of punishment to the evil doer on all the three planes - spiritual, subtle and physical.

Nandi, the Bull: Nandi is said to be the vehicle of Lord Shiva. The bull represents both power and ignorance. Lord Shiva's use of the bull as his vehicle expresses the idea that He removes ignorance and bequeaths power of wisdom on His followers.

Posted by SAMBHU at Tuesday, November 17, 2009 No comments: Links to this post