Posted by SAMBHU at Saturday, October 15, 2011 No comments: Links to this post

Navratri is a Hindu festival of worship of Goddess Durga empowering Shakti. It is celebrated all over India twice a year, once in the beginning of summer and at the onset of winter. The second navratras occur during the lunar month of Ashwin or Kartik (September-October) and Hindus observe ten days of ceremonies, rituals, fasts and feasts in honor of the supreme mother goddess. It begins with the fast of nine days of navratras and on the tenth day Vijayadhasmi is celebrated with lots of enthusiasm and happiness.

Why Celebrated or Significance of Navratris:
Navratri is celebrated to invoke the energy aspect of God in the form of the universal mother, “Durga,” which literally means the remover of miseries of life. It is this energy, which make God to proceed with the work of creation, preservation and destruction. We worship Goddess Durga so that it can take away all the miseries from our life fill our life with happiness and love. On all these nine days, the various forms of Mother Durga are worshipped with dedication and devotion. According to Hindu mythology, she was the one who with her power and shakti defeated the devil “mahisasur” and saved the universe from his evils. Thus, we worship the divine power to bestow upon all of us enough potent powers to maintain our physical and mental balance.

How Navratri is celebrated:
India is a nation of vast culture and tradition. Navratri is celebrated throughout the country in different forms. In North India, all Navratris are celebrated with much dedication by fasting on all nine days and worshipping the Mother Goddess in her different forms. The Chaitra Navratri concludes with Ram Navami and the Sharad Navratri culminates in Durga Puja and Dussehra. All temples are decorated with flowers and adorned with ornaments. You will also find nine days fair very popular in Uttar Pradesh and other northern regions.

In western India, throughout the nine days, both men and women participate in a special kind of dance Garba and Dandiya-Raas around an object of worship. In the south, people set up steps and place idols on them. This is known as golu and Dusshera or the tenth day is celebrated with a lot of fanfare. In the east, people go crazy over Durga Puja, from the seventh till the tenth day of this annual festival which is considered as the biggest festival of Bengalis. Eighth day is traditionally Durgashtami, the biggest occasion of celebration in Bengal.

Nine forms of Goddess Durga:
Basically Navratri is divided into sets of three days to adore three different aspects of the supreme goddess or goddesses. First three days the goddess is worshipped as a spiritual force called Durga also known as Kali in order to destroy all our impurities. Second three days The Mother is adored as a giver of spiritual wealth, Lakshmi, who is considered to have the power of bestowing on her devotees inexhaustible wealth and the final three days are spent in worshipping the goddess of wisdom, Saraswati. Eighth day is traditionally Durgashtami which is big in Bengal.

1. Mata Shailputri: Mata Shailputri is a daughter of mountain king Himalaya / Hemavana. In her previous birth, she was ‘Sati Bhavani Mata’, the daughter of King Daksha and is also known as Parvati who got married with Lord Shiva. She rides a bull and carries a trident and a lotus in her two hands.

2. Mata Brahmacharini: Worshipped at the second day is Goddess Brahmacharini which means one who practices religious austerity. She is the goddess who performed ‘Tapa’ (penance). She holds a rosary (japa Mala) in her right hand and a water utensil (Kamandal) in her left hand. she is considered as the way to emancipation – Moksha.

3. Mata Chandraghanta: The form of Goddess Durga is Mata Chandraghanta. She is worshipped for peace, serenity and prosperity in life. She has a ‘chandra’ or half moon in her forehead in the shape of a ‘ghanta’ or bell and has a golden bright complexion and rides a lion. She has ten hands, three eyes and holds weapons in her hands.

4. Mata Kushmanda: She is worshipped on the fourth day of Navratri and is considered the creator of the universe. She is depicted as having eight or ten hands. She holds weapons, glitter, rosary, etc., in her hands, and she rides a lion.

5. Ma Skanda Mata: The fifth avatar of mother Durga is known as ‘Skanda Mata’ the mother of Skanda or Lord Kartikeya. She is accompanied by the Lord Skanda in his infant form. Skanda Mata has four arms and three eyes and holds the infant Skanda in her right upper arm and a lotus in her right hand which is slightly raised upwards. It is said, by the mercy of Skandmata, even the idiot becomes an ocean of knowledge.

6. Mata Katyayani: Mata Katyayani, the sixth form of mother Durga was born to a saint Kata after long austerities and penance. Ma Katyayani has three eyes and four hands. One left hand holds a weapon and the other a lotus and she rides on Lion.

7. Mata Kalratri: Worshipped at the seventh day Mata Kalratri is also known as Shubhamkari. She has a dark complexion, scruffy hair and a fearlessness posture. She rides on her faithful donkey and has three eyes that shine bright and terrible flames emanate from her breath. Her left upper hand holds a thorn-like weapon, made of iron and there is a dragger in the lower left hand. She is black like Goddess Kali and holds a sparkling sword in her right hand battle all evil.

8. Mata Maha Gauri: She is the Goddess whose power is unfailing and instantly fruitful. All sins of past, present and future get washed away and devotees get purified in all aspects of life on worshipping her. She wears white clothes, has four arms, and rides on a bull. Her right hand is in the pose of allaying fear and her right lower hand holds a trident.

9. Mata Siddhidatri: The ninth form of Goddess Durga is Mata Siddhidatri who has supernatural healing powers. She has four arms and she is always in a blissful happy enchanting pose and rides on the lion. She blesses all Gods, saints, yogis, tantrics and all devotees as a manifestation of the Mother Goddess. Even Lord Shiva worshipped her and was blessed with all Siddhis.

Posted by SAMBHU at Monday, October 03, 2011 No comments: Links to this post 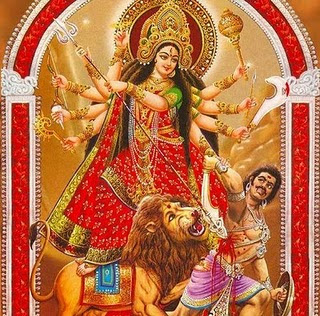 Mr. Sudesh Surve, a resident of Mandavi, Ratnagiri, India, is a sculptor who has been sculpting the idols of Lord Ganesh and the female deity (Devi) for the past six years. He is also a member of the Navratrotsav Mandal in Mandavi. His thoughts on his art of sculpting and Navratri celebration are given below.

Mr. Surve mentioned that he looks upon sculpting idols not as a profession, but as an art. He uses Shadu clay for making sculpture. He said that he does not make idols of plaster of Paris material because it does not dissolve in water properly. Hence, after immersing such idols, some parts of them may be seen floating near the seashore or riverbank. He said he feels distressed seeing the remnants of idols floating thus. He said that he makes idols of different forms of the female deity (Devi), such as sitting on the lion or tiger, destroying the demons (asur), seated, etc.

Sometimes after completing an idol, Mr. Surve realizes that the Goddess Herself Who got it sculpted, using him as a medium. He has noticed that the atmosphere at home is Blissful when an idol is being sculpted. Also, ever since he started sculpting idols, he has never experienced any financial or physical constraints.

Experience of increase in unity in the town during Navratri

While mentioning about celebration of Navratri, Mr. Surve said that before the beginning of Navratri, everyone from various parts of their town comes together to discuss and plan the celebration. Accordingly, they celebrate it collectively in the main areas of the town instead of celebrating it individually. They celebrate Navratri not only for the Garbha/Dandiya ras, but also with the intention of uniting all the townspeople. During the celebration, they organize spiritual programs, such as singing holy songs (bhajans), performing ritualistic fire (Chandiyag), etc. They play only holy songs on the public celebration music system.

Members of their organization are assigned a satseva responsibility each to perform for the 10 days of Navratri celebration. During the celebration they organize different types of programs for children. For the award ceremony, they invite a person who is good in character, rather than inviting politicians. During this period most people from their town do not consume meat, alcohol or tobacco.

Donations for celebration should be voluntary not demanded

Regarding collecting donations and playing the music system during the celebration, Mr. Surve said that they follow time limits (as set by the local government) for Dandiya ras and only accept donations that people give voluntarily.

Programs during celebration should be about Righteousness (Dharma) and culture (Sanskruti)

Mr. Surve suggested that programs during Navratri celebration should be educational and informative. Programs that provide information on our Dharma should be held. He further said that our benefit lies in behaving as per our Scriptures or Holy texts. Hence, during Navratri celebration, their organization holds sattvik programs for children like grammatically correct writing, memorizing holy verses (shlokas), etc.

Mr. Surve mentioned that as a part of the celebration of Navratri, they take up a social service project and provide opportunities for people to volunteer their time and effort. During the last three years' celebrations, they have cleaned the local crematorium (smashanbhoomi) and cemetery (kabrastan), and temple, respectively.

Posted by SAMBHU at Monday, October 03, 2011 No comments: Links to this post

Hindu Blog: Durgashtami – Importance of Durga Ashtami: Durgashtami, or Durga Ashtami, is the eight day of the Navaratri and Durga Puja celebrations. Durgastami is also known as Mahashtami and is ...
Posted by SAMBHU at Monday, October 03, 2011 No comments: Links to this post