Shani Dev is one of the most popular deities that the Hindus pray to ward off evil and remove obstacles.

Shani literally means the “slow-moving-one”. According to myths, Shani oversees the "dungeons of the human heart and the dangers that lurks there."

Shani is represented as having a dark complexion and is said to be the son of Surya, the sun god, and Chaya, the servant whom his wife Swarna surrogated. He is the brother of Yama, the god of death and is believed by many to be an avatar of Shiva.

The Lord of Bad Luck?:

Stories about his evil influence abound. Shani is said to have chopped off Ganesha’s head. He is lame and has a limp because his knee was injured when he fought as a child with Yama. In the mythology, he is represented as riding a chariot, carrying a bow and arrow and pulled by a vulture or crow. Shani is found wearing a blue cloth, blue flowers and sapphire.

He is also known as Saura (son of sun-god), Kruradris or Kruralochana (the cruel-eyed), Mandu (dull and slow), Pangu (disabled), Saptarchi (seven-eyed) and Asita (dark).

The Ill-effect of His Planet - Saturn:

Hindus are under fear of evil from his planet - Saturn. In Vedic astrology, the planetary position at the time of birth determines the future of a person. So, Hindus accord immense importance to the planets, and Saturn or Shani is one such planet which they fear the most for ill-luck. Anyone born under his influence is believed to at risk.

How to Appease Shani:

To appease him, many pay obeisance every Saturday by lighting a lamp before the image of Shani and reading the ‘Shani Mahatmyaham’. He is pleased to accept lamps lit with sesame or mustard oil. Even the day named after him, Shanivara or Saturday, is considered inauspicious to begin any new venture.

The Giver of Kindness:

“Yet o son of Chhaya (shadow) you are the fire who can destroy Time itself and like Kamadhenu, the wish giving cow, you grant us all good things with kindness and compassion”, wrote Muthuswami Dikshitar (1775-1835) in his musical ‘Navagraha’ (Nine Planets) composition in Sanskrit.

Most Hindu temples have a little shrine set apart for the ‘Navagraha’ or the nine planets where Shani is placed. Kumbakonam in Tamil Nadu, the oldest Navagraha temple has the most benign Shani. Another important Shani temple is at Shingnapur in Maharashtra where the deity is represented as a block of stone. Navi Mumbai has a Sri Shaniswar temple at Nerul while Delhi has a popular Shanidham at Fatehpur Beri in the historic Mehrauli area.

Meaning:
Oh the divine couple Shiva Parvati !
O ! Thee, the protectors of this universe,
Along with Lords Brahma and Vishnu
We pray to You for our well-being, prosperity and the enlightenment of our souls.

Lord Shiva Prayer - II
This mantra is a prayer to Lord Shiva who is addressed as Sankara and Trayambaka. Sankara means giver of blessings: (sana = blessings, Kara = the Giver). Trayambaka is the three eyed one, where the third eye signifies the giver of knowledge, which destroys ignorance and releases us from the cycle of death and rebirth.

Lord Shiva or Siva is considered as the destroyer of the world. Shiv is one of the most popular Gods of the Hindu religion. Shiva is one of the complex gods who is rudra as well as kind-hearted, simultaneously. Mantra of Hindu God Shiva forms the part of prayers offered to the lord. Shiv or Shiva Mantras are as follows:

Meaning: Lord Shiva is the consort of Uma (Parvati). Shiva is the divine Guru, the source of the universe. Lord Shiva is decked with snake and wears tiger skin. He is the Lord of all creatures. The three eyes of the lord represent the Sun, Moon and Fire. Shiva is near to Lord Vishnu. Lord Shiva protects all of his devotees. He is the benefactor of boons. We surrender ourselves again and again to Lord Shiva.

Meaning: Lord Mahadeva (Shiva) has conquered death. He is the destructive force of the universe. He has a blue neck and he gives happiness to all. We pray to the kind-hearted lord, Shiv-Shambhu.

Meaning: Lord Kaamaarey (another name for Lord Shiva) protects us from the evil. He is the consort of Gauri, the mother goddess. He drank the "Kaala Koota" poison (which was the outcome of the ocean churning). He is the destroyer of the three cities. We seek protection at the feet of Lord Shiva. 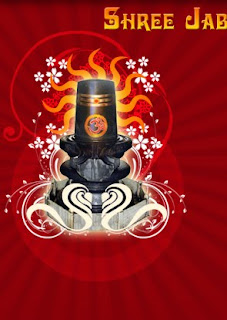 Shiva to mean "One who purifies everyone by the utterance of His name" or the Pure One. "the Auspicious One."He is the formless, timeless and spaceless, Supreme God of universe,time and everything.

Shiva is one of the gods of the Trinity. Shiva is married to the Goddess Parvati (Uma). Parvati represents Prakriti, which means perishable matter. Lord Shiva sits in a meditative pose on Mount Kailash against the white background of the snow-capped Himalayas. Lord Shiva not only represents the supreme state of perfection in man, but in his very pose indicates the way to reach it as well. The state of meditation shown in Shiva's posture is again symbolic. Meditation is the final gateway to Self-realization. On the auspicious occasion of Mahashivratri, Shiva performs the ecstatic dance of realization. Shiva is said to have a third eye known as gyana chakshu. Gyana chakshu literally means eye of wisdom. Shiva is also known as Gangadhara. which literally means, 'the carrier of Ganga' (river). Shiva is sometimes shown with his trident (trisula) in his hand. The trisula is a trident which symbolise's the destruction of the ego with its three-fold desires of the body, mind and intellect. Nataraja is Lord Shiva in the dance pose.He destroys evil and protects good. He bestows prosperity on worshipers although he is austere. He is omnipresent and resides in everyone as pure consciousness. One of his names is Bholenath, which means the innocent God. Lord shiva is Creator, destroyer and preserver of the universe.Shadding old habits generating new one and preserving the same. Shiva is often worshipped in an abstract manner, as God without form, in the form of linga.

Satyam,Shivam,Sunderam truth everything goodness and beauty, truth is everything and beautiful.Shiva is God of Yogis and stand for Kundalini Shakti energy.

Names and Meaning of Lord Shiva.

o Hara : The one who takes away Sorrow and pain.
o Mahadeva - The Supreme Lord : Maha = great, Deva = God
* Rudra The one who howls or strict and uncompromising
* Maheshwara The Supreme Lord: Maha = great, Eshwar = God
* Rameshwara - The one whom Ram worships: Ram, Eshwar = worships, God; Ram's God
* Mahayogi The Supreme Yogi: Maha = great, Yogi = one who practices Yoga
* Mahabaleshwara - God of Great Strength : Maha = great, Bal = strength, Eshwar = God
* Trinetra - Three-Eyed One, i.e. All-Knowing: Tri = three, Netra = Eye
* Triaksha - Three-Eyed One, i.e. All-Knowing: Tri = three, Aksha = Eye
* Trinayana- Three-Eyed One, i.e. All-Knowing: Tri = three, Nayana = Eye
* Tryambakam - Three-Eyed One, i.e. All-Knowing: Tri = three, Ambakam = Eye
* Mah?kala - Great Time, i.e. Conqueror of Time: Maha = three, Kala = Time
* Neelakantha - The one with a Blue Throat: Neel = blue, Kantha = throat
* Digambara - One who has the skies as his clothes, i.e. The Naked One: Dik = Clothes, Ambara = Sky
* Shankara - Giver of Joy
* Shambhu - Abode of Joy
* Vyomkesha - The One who has the sky as his hair: Vyom = sky, Kesha =hair
* Chandrashekhara - The master of the Moon: Chandra = Moon, Shekhara = master
* Siddheshwara - The Perfect Lord
* Trishuldhari - He who holds the divine Trishul or Trident: Trishul = Trident, Dhari = He who holds
* Dakhshinamurthi - The Cosmic Tutor
* Kailashpati - Lord of Mount Kailash
* Pashupatinatha - Lord of all Creatures or Pashupati
* Umapati - The husband of Uma
* Gang?dhara - He who holds the river Ganga
* Bhairava - The Frightful One
* Sabesan - Lord who dances in the dais
* Nagaraja - King of snakes (Lord/Ruler/Controller of snakes)
* Ekambaranatha The destroyer of evil
* Tripurantaka The destroyer of the triplet fortresses Asuras.
* Ashutosh, easy to please God.

Shiva is one of the trimurthi (Trinity) - Brahma, Vishnu and Shiva, respectively incharge of the creation, sustenance and destruction of the world. He is known by many other names in the various parts of India. Shankar, Mahadev, Mahesh, Shiv Shankar, Bhole Nath are some of his popular names. He has his abode on Kailash mountain and is also known as Kailashpati.

Parvati Devi also known as Girija, Uma or Bhavani is the consort of Lord Shiva. She is the daughter of Himvan, the king of mountains. In her previous life she was born as Sati, daughter of king Daksha. She took her own life during an Yajna (fire worship) performed by her father king Daksha because he did not invite her and her husband to the Yajna and insulted Lord Shiva. When she was born as daughter of Himvan, she performed Tapasya to marry Lord Shiva. During her Tapasya, she lived for many years on leaves and was given the name of Aparna.