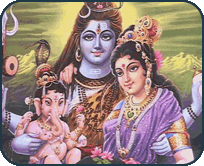 There is famous Rigvedic Verse that says "Ekam Sat " that is "There is one Being, the sages call him by many names." The God (Parmeshwar) has three deities who carry on the world .This is Known as Holy Trinity. Brahma- the creator, Vishnu - the perpetuator of life and Shiva (Mahesh ) -the purifier and perpetuator of good and destroyer of evil. Rig Veda refer Shiva as Rudra as in its following verse . "We Worship Tryambaka (Rudra) , Who spread Fragrance and Increases Nourishment , May He release me, like the cucumber from its stem, From Mortal Life, But not From Immorality. "(Rig Veda Mandal VII Sukta 59 and Mantra 12)
The Yajurveda describes Shiva as ascetic warrior Whose robe is of Deer Skin and he carries Trishul.
According to the verse Satyam, Shivam, Sundaram the life is described as having three facets Truth (Satyam), Good (Shivam) and the Beautiful (Sundaram).
According to the older scriptures, He has three places of his residence. One is Kailash Parvat another is Lohit Giri under which Brahamputra flows and third is Muzwan Parvat.
The Amarnath Cave has special significance .
The Legend about the importance of Amarnath Cave is as follows :-
This is The Cave which was chosen by Bhole Shankar for narrating the secrets of immortality and creation of Universe to Maa Parvati ji. The story goes like this. Centuries ago Maa Parvati asked Shiv ji to let her know why and when he started wearing the beads of heads ( Mund Mala). Bhole Shankar replied when ever you are born I add one more head in my beads. Maa Parvati said, " My Lord, my body is destroyed every time and I die again and again, but you are Immortal. Please let me know the secret of this ." Bhole Shankar replied that it is due to Amar Katha ."
Maa Parvati insisted that she may be told that secret. For long Shiva ji continued postponing . Finally on consistent demand from Maa Parvati he made up his mind to tell the immortal secret . He started for lonely place where no living being could listen it. He choose Amarnath Cave. In preparation to that he left his Nandi ( The Bull which he used to ride ) at Pahalgam (Bail gaon). At Chandanwari he released Moon from his hairs (Jataon). At the banks of Lake Sheshnag he released the snakes. He decided to leave his son Ganesha at Mahagunas Parvat (Mahaganesh Hill ). At Panchtarni, Shivji left the Five Elements behind (Earth , Water, Air , Fire and Sky) which make living being. He is the Lord of these elements. It is believed that as a symbol of sacrificing the earthly world, Shivaji and Maa Parvati had Tandav Dance. After leaving behind all these, Bhole Shankar enters the Holy Amarnath Cave along with Parvati Maa. Lord Shiva takes his Samadhi on the Deer Skin and concentrate . To ensure that no living being is able to hear the Immortal Tale, He created Rudra named Kalagni and ordered him to spread fire to eliminate every living thing in and around the Holy Cave. After this he started narrating the secret of immortality to Maa Parvati. But as a matter of chance one egg which was lying beneath the Deer skin remained protected. It is believed to be non living and more over it was protected by Shiva -Parvati Asan (Bed). The pair of pigeons which were born out of this egg became immortal having listened the secret of immortality (Amar Katha).
Many pilgrims report seeing the pair of pigeons when they trek the arduous route to pay their obeisance before the Ice-Lingam (the phallic symbol of Shiva).

The trek to Amarnath, in the month of sharavan ( July–August) has the devout flock to this incredible shrine, where the image of Shiva, in the form of a Lingam, is formed naturally of an Ice Stalagmite, which waxes and wanes with the Moon's cycle. By its side are fascinating, two more Ice Lingams, that of Maa Parvati and of their son, Ganesha .

Mt. Kailash has the unique distinction of being the most venerated yet least visited of the world's major holy places. Soaring above 22,000 feet, the mountain is the supremely sacred site of four religions and billions of peoplePilgrims to Kailash, after the difficult journey getting there, are then confronted with the equally arduous task of circumambulating the sacred peak. This walking around the mountain (clockwise for the Buddhists, counter-clockwise for Bon adherents) is known as a Kora, or Parikrama, and normally takes three days. In hopes of gaining extra merit or psychic powers however, some pilgrims will vary the tempo of their movement. A hardy few, practicing a secret breathing technique known as Lung-gom, will power themselves around the mountain in only one day (the author’s method). Others will take two to three weeks for the Kora by making full body prostrations the entire way. It is believed that a pilgrim who completes 108 journeys around the mountain is assured enlightenment. Most pilgrims to Kailash will also take a short plunge in the nearby, highly sacred (and very cold) Lake Manosaravar. The word 'manas' means mind or consciousness; the name Manosaravar means Lake of Consciousness and Enlightenment. Adjacent to Manosaravar is Rakas Tal or Rakshas, the Lake of Demons. Pilgrimage to this great sacred mountain and these two magical lakes is a life changing experience and an opportunity to view some of the most magical scenery on the entire planet. Kailash abode of Lord Shiva. The Jains call the mountain Astapada and believe it to be the place where Rishaba, the first of the twenty-four Tirthankaras attained liberation.

For Hindus, the name of the mountain is Sivan Adi Padham, because it was the world-creative dance of the god Shiva that left the giant footprint (5 feet 7 inches by 2 feet 6 inches).